Full Name
Hoda Kotb
Job Title
Co-anchor & Co-host
Company
TODAY & TODAY with Hoda & Jenna
Bio
Hoda Kotb is the co-anchor of NBC News’ “TODAY” and co-host of the fourth hour of NBC News’ TODAY alongside Kathie Lee Gifford. Kotb joined “TODAY” as a co-host of the fourth hour in 2008, and the Gifford-Kotb hour has been hailed as “appointment television” by Entertainment Weekly, “uproarious and irresistible” by People, and “TODAY’s happy hour” by USA Today.

Since joining NBC in 1998, Kotb has served as a correspondent for “Dateline NBC.” She has covered a wide variety of domestic and international stories across all NBC News platforms as well as numerous human-interest stories and features. She covered the aftermath and one-year anniversary of Hurricane Katrina, a story personal to Kotb who lived in New Orleans for six years. Additionally, she has reported on the war in Iraq, the conflict in the West Bank and Gaza, and the War on Terror in Afghanistan. Kotb was a part of the network’s extensive coverage of the 2012 Summer Olympics in London, 2016 Summer Olympics in Rio and 2018 Winter Olympics in Pyeongchang.

A New York Times bestselling author, Kotb has written five books: I’ve Loved You Since Forever, Hoda: How I Survived War Zones, Bad Hair, Cancer and Kathie Lee; Ten Years Later: Six People Who Faced Adversity and Transformed Their Lives and Where They Belong. Kotb is an 9-year breast cancer survivor and is involved in several initiatives to raise awareness about the disease.

Kotb was recognized with a 2016 Gracie Award for Outstanding Host in Entertainment/Information for her radio show, “The Hoda Show on SiriusXM.” In 2015, she was honored with a Gracie Award for Outstanding Host in News/Non-fiction and a Webby Award for her ‘Truly Brave’ music video, shining a light on pediatric cancer. Kotb received additional Gracie Awards in 2008 and 2003, the Alfred I. duPont –Columbia University award in 2008, a Peabody Award in 2006 for her “Dateline NBC” report, “The Education of Ms. Groves” and a 2002 Edward R. Murrow Award. In 2010, 2011 and 2012, Kotb was awarded Daytime Emmys as part of TODAY’s recognition as the best morning news program.

Kotb graduated from Virginia Tech University with a Bachelor of Arts in broadcast journalism. She welcomed daughter Haley Joy in February 2017 and resides in New York City. 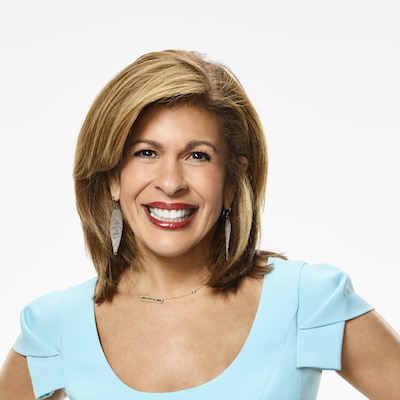